In the different section, I will here assume that your home is equipped with a total network infrastructure and in many case that you as well have a Home Server installed. 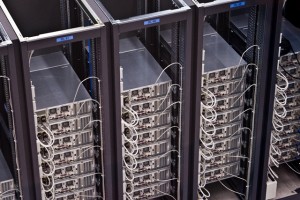 To communicate efficiently, the different items of our home will need to have communication network. This is what many of you have already at home (maybe without even realizing it) but that you will need to gain control over so that you can have a properly working home.

Nowadays, the home network will rely mostly on 2 technologies: the plain old Ethernet and the Wi-Fi. A third complement is here the Powerline Communication.

Ethernet is what most of you know as well as network cable, basically, all items of the network are linked by network cables with the standard RJ45 connector. In many cases, a Fast Ethernet will be enough but to be really working well, you’ll need to be in Gigabit Ethernet.

Those are the different standard when it comes to the speed of the connection link, Fast Ethernet is also known as 10/100Mbps as it can work on both these data transfer rates. 100Mbps means that you will typically copy a 5MB photo in 0.5s and a 2GB HD movie in 2 minutes and 30 seconds. A Gigabit add one more speed with 1000Mbps and is identified then as 10/100/1000Mbps. It will copy your 5MB photo in less than 0.1s and your 2GB HD movie in about 20s. You can see here that 100Mbps would be fine though 1000Mbps is far more comfortable.

Yes, there is faster, but I would not advise to look into it except if you are building a network for heavy traffic (I am talking here multiple persons copying gigabytes of files back and forth). It will indeed be far more expensive to jump to next speed (10Gbps) and you might as well see no improvement because your hard-drive will become the bottleneck (Nowadays, they are about 80-160MB/s or 640-1280Mbps, far from the 10000Mbps).

The advantages of the Ethernet are surely the speed and stability. The installation is both difficult (you need to run cables through your home) and easy (once cable are in place, it is just plug and play)

The second technology is maybe not second anymore by the sheer number of devices that are now using wi-fi. Smartphones and Tablets are the most known of those new devices. We have here again different standard with different speeds. Wi-Fi B, G, N and AC.

For our application, the Wi-Fi will need to be at least of N standard (except in few cases) and will need to be stable and well managed. Indeed, the weakness of the Wi-Fi is that it suffers from interference (you know, those 15 different networks you see when trying to connect your smartphone). This effectively drops the actual bandwidth of the connection and therefore the performances.

We will enjoy the Wi-Fi when we are talking about remote control or about reaching some remote place where running a cable is too much of a hassle, we will also be shouting on it when we will have connection dropped, low bandwidth, issue with the passwords, need to install repeater…

I mention Powerline as it might be a good alternative for few of you. the basic principle is that they use the power lines already in place in your house to transmit the data. It basically gets the best of both Ethernet and Wi-Fi. It is a stable well established connection as Ethernet (although not as fast) and it is almost as simple to retrofit a house as with the Wi-Fi. the only thing you need is to invest in Powerline adapters to do the bridge between the network connector of your devices and the power line.

The network as I described above will need to be organized by a device so that it all work seamlessly. This device would be the router. His job is basically to give to each device in the network an IP address so that they can communicate. A bit like each of us has a name and when you send a parcel, you say : “Give this to John”, a network device will send a piece of information and say “Give this to 192.168.0.11”. The router may or may not include a modem and Wi-Fi capabilities, most of them do include the modem as for the Wi-Fi, they tend to have it more and more too.

The Modem is a small thing that will translate the signal from the telephone lines and/or optical fiber (i.e. Internet) to signal for the home network and vice-versa.

Another piece of hardware that will greatly improve your installation would be the Home Server. As it is fairly complex, I will go through it in details in a full dedicated section.

A network switch is a device that will add some more connection ports so that you can have more devices in your network. 2 kinds of switches, managed and unmanaged. The unmanaged one will most likely be the one you want (if you are able to manage a switch, you might not need this website 😉 )

Those are used to extend the Wi-Fi coverage to a place too far away or that is shielded by a thick wall or other obstacle.

I think that’s it, your home is now ready and you can start with the Home Entertainment settings.